The case of the collapsing soil 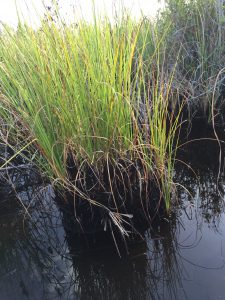 An area in the Florida Everglades where strange soil collapse has been observed.

As winds blow through the large expanses of grass in the Florida Everglades, it looks like flowing water. This “river of grass” is home to a wide diversity of plants and animals, including both the American Alligator and the American Crocodile. The Everglades ecosystem is the largest sub-tropical wetland in North America. One third of Floridians rely on the Everglades for water. Unfortunately, this iconic wetland is threatened by rising sea levels caused by climate change. Sea level rise is caused by higher global temperatures leading to thermal expansion of water, land-ice melt, and changes in ocean currents.

With rising seas, one important feature of the Florida Everglades may change. There are currently large amounts of carbon stored in the wetland’s muddy soils. By holding carbon in the mud, coastal wetlands are able to help in the fight against climate change. However, under stressful conditions like being submersed in sea water, soil microbes increase respiration. During respiration, carbon stored in the soil is released as carbon dioxide (CO2), a greenhouse gas. As sea level rises, soil microbes are predicted to release stored carbon and contribute to the greenhouse effect, making climate change worse. 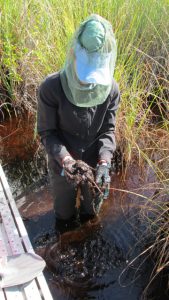 Shelby collecting soil samples from areas where the soil has collapsed in the Everglades.

Shelby and John are ecologists who work in southern Florida. John became fascinated with the Everglades during his first visit 10 years ago and has been studying this unique ecosystem ever since. Shelby is interested in learning how climate change will affect the environment, and the Everglades is a great place to start! They are both very concerned with protecting the Everglades and other wetlands. Recently when John, Shelby, and their fellow scientists were out working in the Everglades they noticed something very strange. It looked like areas of the wetland were collapsing! What could be the cause of this strange event?

John and Shelby thought it might have something to do loss of carbon due to sea level rise. They wanted to test whether the collapsing soils were the result of increased microbial respiration, leading to loss of carbon from the soil, due to stressful conditions from sea level rise. They set out to test two particular aspects of sea water that might be stressful to microbes – salt and phosphorus.

Phosphorus is found in sea water and is a nutrient essential for life. However, too much phosphorus can lead to over enriched soils and change the way that microbes use carbon. Sea water also contains salt, which can stress soil microbes and kill plants when there is too much. Previous research has shown that both salt and phosphorus exposure on their own increase respiration rates of soil microbes. 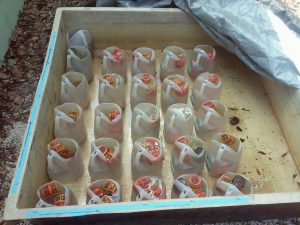 A photo of the experimental setup. Each container has a different level of salt and phosphorus concentration.

To test their hypotheses, a team of ecologists in John’s lab developed an experiment using soils from the Everglades. They collected soil from areas where the soil had collapsed and brought it into the lab. These soils had the microbes from the Everglades in them. Once in the lab, they put their soil and microbes into small vials and exposed them to 5 different concentrations of salt, and 5 different concentrations of phosphorus. The experiment crossed each level of the two treatments. This means they had soil in every possible combination of treatments – some with high salt and low phosphorus, some in low salt and high phosphorus, and so on. Their experiment ran for 5 weeks. At the end of the 5 weeks they measured the amount of CO2 released from the soils.