How to Escape a Predator 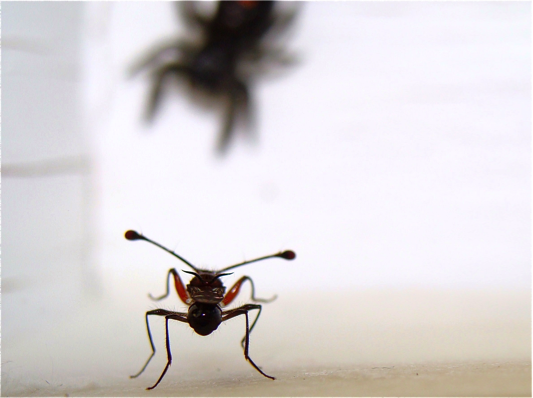 A stalk-eyed fly and spider interacting in the arena.

Stalk-eyed flies are insects that have their eyes on the ends of eyestalks, or long projections from the sides of their head. Eyestalks are a sexual signal that males use to attract females. The longer the eyestalks, the more attractive a male is to females and the more mates he gets. For these flies, sexual selection leads to an elaborate trait, just like a peacock’s tail. Males with longer eyestalks have more babies and pass their traits on. Over generations, sexual selection leads to longer and longer eyestalks in males. 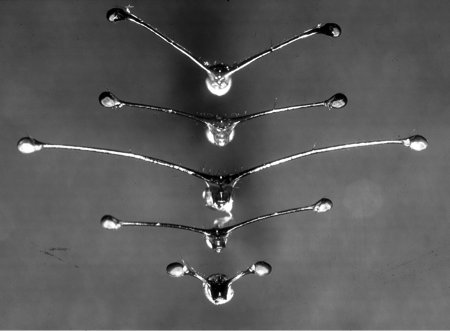 In addition to eyestalk length, other traits could affect survival in male stalk-eyed flies. Perhaps the fly’s behavior is more important than its eyestalk length when faced with a predator. When biologists Amy and John first started researching how eyestalk length affected survival, they noticed something intriguing! The flies showed many different behaviors when face to face with a spider predator. Some examples of behaviors included grooming, walking or flying towards the predator, quickly walking or flying away from the predator, displaying forelegs, and bobbing their abdomens. When prey use these antipredator behaviors, predators must put in more work to catch prey, and they will sometimes give up. Therefore, antipredator behaviors may influence the predator’s choice of prey, and certain behaviors that make prey harder to catch could lead to increased survival.

To test whether differences in eye stalk length and/or antipredator behavior were important for survival, male stalk-eyed flies were put in cages with predators. Amy and John filmed the fly behaviors and analyzed the footage. They calculated the frequency and proportion of time that flies were displaying antipredator behaviors. If males with longer eyestalks have lower survival than males with shorter eyestalks, it suggests that longer eyestalks make it harder to avoid predators. However, if eyestalk length has no effect on survival, it suggests that male flies with long eyestalks are able to compensate for their lack of speed through behavior.