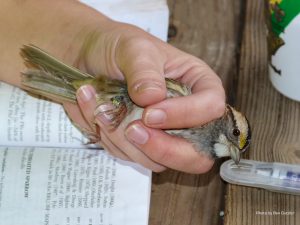 A white-throated sparrow caught during the experiment. You can see the band on it’s leg, used to make sure they did not record the same bird more than once.

Glass makes for a great windowpane because you can see right through it. However, the fact that windows are see-through makes them very dangerous for birds. Have you ever accidentally run into a glass door or been confused by a tall mirror in a restaurant? Just like people, birds can mistake a see-through window or a mirrored pane for an opening to fly through or a place to get food and will accidentally fly into them. These window collisions can hurt the bird or even kill it. Window collisions kill nearly one billion birds every year!

Urban areas, with a lot of houses and stores, have a lot of windows. Resident birds that live in the area may get to know these buildings well and may learn to avoid the windows. However, not all the birds in an area live there year-round. There are also migrant birds that fly through urban areas during their seasonal migrations. In the fall, for example, migrant birds use gardens and parks in urban areas to rest along their journeys to their winter southern homes. During the fall migration, people have noticed that it seems like more birds fly into windows. This may be because migrant birds, especially the ones born that summer, are not familiar with the local buildings. While looking for food and places to sleep, migrant birds might have more trouble identifying windows and fly into them more often. However, it could also be that there are simply more window collisions in the fall because there are more birds in the area when migrant and resident birds co-occur in urban areas. 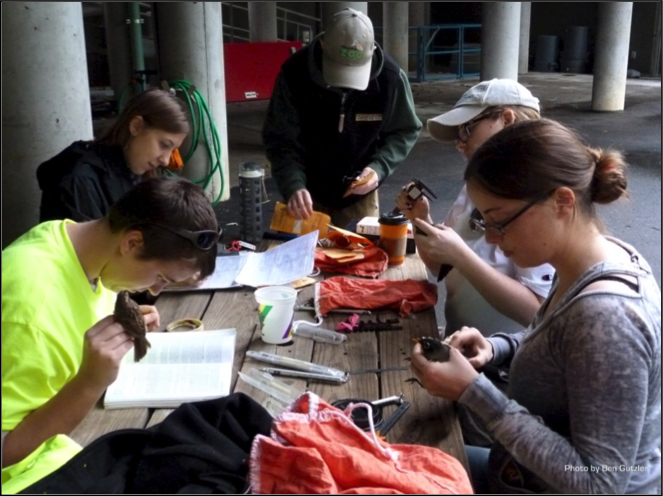 Researchers identify the species of each bird caught in one of the nets used in the study. They then place a metal bracelet on one leg so they will know if they catch the same bird again.

Natasha was visiting a friend who worked at a zoo when he told her about a problem they were having. For a few weeks in the fall, they would find dead birds under the windows, more than they would during the rest of the year. He wanted to figure out a way to prevent birds from hitting the exhibit windows. Natasha became interested in learning whether migrant birds were more likely to fly into windows than resident birds or if the number of window collisions only increase in the fall because there are a lot of birds around. To do this she would have to count the total number of birds in the area and also the total number of birds that were killed in window collisions, as well as identify the types of birds. To count the total number of birds in the area, Natasha hung nets that were about the same height as windows. When the birds got caught in the nets, Natasha could count and identify them. These data could then be used to calculate the proportion of migrants and residents flying at window-height. She put 10 nets up once a week for four hours, over the course of three months, and checked them every 15 minutes for any birds that got caught. 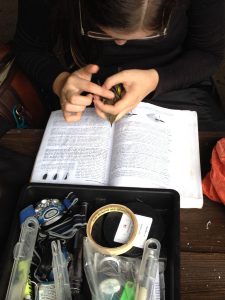 Researcher identifying a yellow-rumped warbler, one of the birds captured in the net as part of the study.

Then, she also checked under the windows in the same area to see what birds were killed from window collisions. She checked the windows every morning and evening for the three months of the study. Different species of birds are migratory or resident in the area where Natasha did her study. Each bird caught in nets was examined to identify its to species using its feathers, which would tell her whether the bird was a migrant or a resident. The same was done for birds found dead below windows.

To engage students with the lesson before they begin, or after the lesson to help them develop their own independent questions for the system, you can share the following videos: