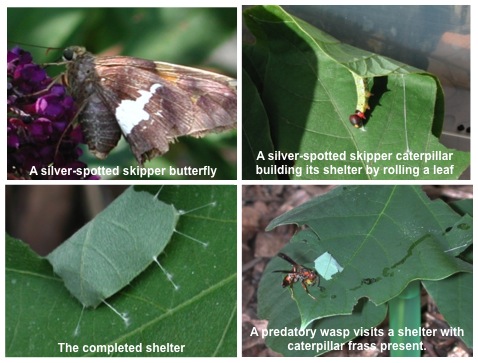 Imagine walking through a forest in the middle of summer. You can hear birds chirping, a slight breeze rustling the leaves, and a faint pinging noise like rain. However, what you hear is not rain – it is the sound of millions of forest insects pooping!

If we look closer to see who is making all this frass (insect poop) you’ll notice there are tons of caterpillars amongst the leaves. You might see caterpillars eating plants and hiding from predators. Some caterpillars might camouflage themselves, while others build shelters from leaves to avoid being seen. Others are brightly colored to warn predators that they have chemicals that make them taste awful.

The silver-spotted skipper is a caterpillar that lives in the forest. They have a variety of defense strategies against enemies, including building leaf shelters for protection. For these insects, the sight and smell of poop might alert predators that there is a tasty meal nearby. Usually caterpillars keep moving and leave their frass behind, but this species builds shelters and isn’t able to keep moving because they need their shelters for protection.

Martha is a behavioral biologist who studies these insects. While raising silver-spotted skipper caterpillars in the lab, Martha noticed that they were making a pinging noise in their containers. Upon further observation, she discovered that they “shoot their poop”, sometimes launching their frass over 1.5m! Martha wanted to figure out why these caterpillars might have this very strange behavior. Perhaps launching their frass is a way to avoid being found by predators.

To evaluate whether the smell of frass helps predators find and locate silver-spotted skippers, Martha conducted an experiment with a wasp predator that eats these caterpillars. She allowed two silver-spotted skippers to build shelters on a leaf and then carefully removed the caterpillars. She then inserted 6 frass pellets into one of the shelters, and 6 beads designed to look like frass but with no smell (control treatment) into the other shelter. She placed the leaf with the two shelters in a cage containing an actively foraging wasp colony (n = 10 wasps). She recorded how many times the wasps visited each shelter (control beads or frass) and how much time the wasps spent exploring each shelter. She expected wasps would spend more time exploring the shelters with the frass than they would the control shelters.

YouTube videos of the silver-spotted skipper (Epargyreus clarus) “shooting its poop” (aka. ballistic defecation). These videos would be great to show in class after students have read the Research Background section to help engage them with the system.