Fertilizing biofuels may cause release of greenhouse gasses 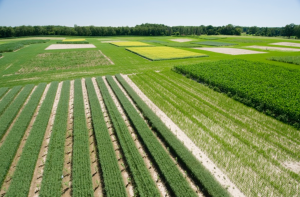 An aerial view of the experiment at MSU where biofuels are grown. Photo credit: K. Stepnitz, MSU

Greenhouse gases in our atmosphere, like carbon dioxide (CO2), methane (CH4), and nitrous oxide (N2O), trap heat from the sun and warm the earth. We need some greenhouse gases to keep the planet warm enough for life. But today, the majority (97%) of scientists agree that the levels of greenhouse gases are getting dangerously high and are causing changes in our climate that may be hard for us to adjust to. 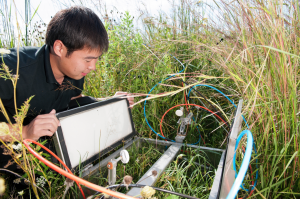 When we burn fuels to heat and cool our homes or power our cars we release greenhouse gasses. Most of the energy used today comes from fossil fuels. These energy sources are called “fossil” fuels because they come from plants, algae, and animals that lived hundreds of millions of years ago! After they died, their tissues were buried and slowly turned into coal, oil, and natural gas. An important fact about fossil fuels is that when we use them, they release CO2 into our atmosphere that was stored millions of years ago. The release of this stored carbon is adding more and more greenhouse gases to our atmosphere, and much faster than today’s plants and algae can remove during photosynthesis. In order to reduce the effects of climate change, we need to change the way we use energy and think of new ways to power our world.

One potential solution could be to grow our fuel instead of drilling for it. Biofuels are a potential substitute for fossil fuels. Biofuels, like fossil fuels, are made from the tissues of plants. The big difference is that they are made from plants that are alive and growing today. Unlike fossil fuels that emit CO2, biofuel crops first remove CO2 from the atmosphere as the plants grow and photosynthesize. When biofuels are burned for fuel, the CO2 is emitted back into the atmosphere, balancing the total amount that was removed and released.

Scientists are interested in figuring out if biofuels make a good replacement for fossil fuels. It is still not clear if the plants that are used to produce biofuels are able to absorb enough CO2 to offset all of the greenhouse gases that are emitted when biofuels are produced. Additional greenhouse gases are emitted when producing biofuels because it takes energy to plant, water, and harvest the crops, as well as to convert them into fuel. In order to maximize plant growth, many biofuel crops are fertilized by adding nitrogen (N) fertilizer to the soil. However, if there is too much nitrogen in the soil for the crops to take up, it may instead be released into the atmosphere as the gas nitrous oxide (N2O). N2O is a greenhouse gas with a global warming potential nearly 300 times higher than CO2! Global warming potential is a relative measure of how much heat a greenhouse gas traps in the atmosphere.

Leilei is a scientist who researches whether biofuels make a good alternative to fossil fuels. He wondered what steps farmers could take to reduce the amount of N2O released when growing biofuel crops. Leilei designed an experiment to determine how much N2O is emitted when different amounts of nitrogen fertilizer are added to the soil. In other words, he wanted to know whether the amount of N2O that is emitted into the atmosphere is associated with how much fertilizer is added to the field. To test this idea, he looked at fields of switchgrass, a perennial grass native to North America. Switchgrass is one of the most promising biofuel crops. The fields of switchgrass were first planted in 2008 as a part of a very large long-term study at the Kellogg Biological Station in southwest Michigan. The researchers set up eight fertilization treatments (0, 28, 56, 84, 112, 140, 168, and 196 kg N ha−1) in four replicate fields of switchgrass, for a total of 32 research plots. Leilei measured how much N2O was released by the soil in the 32 research plots for many years. Here we have two years of Leilei’s data.