Winter is coming! Can you handle the freeze? 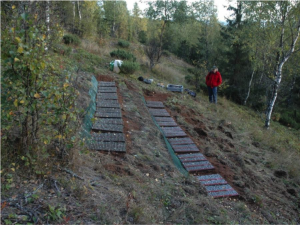 Doug with the reciprocal transplant experiment in Scandinavia.

Doug is a biologist who studies plants from around the world. He often jokes that he chose to work with plants because he likes to take it easy. While animals rarely stay in the same place and are hard to catch, plants stay put and are always growing exactly where you planted them! Using plants allows Doug to do some pretty cool and challenging experiments. Doug and his research team carry out experiments with the plant species Mouse-ear Cress, or Arabidopsis thaliana. They like this species because it is easy to grow in both the lab and field. Arabidopsis is very small and lives for just one year. It grows across most of the globe across a wide range of latitudes and climates. Arabidopsis is also able to pollinate itself and produce many seeds, making it possible for researchers to grow many individuals to use in their experiments. 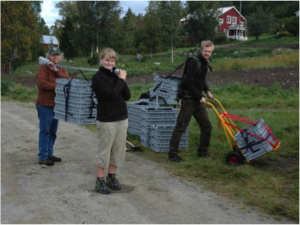 Doug, and two members of his team, setting up the reciprocal transplant experiment in Scandinavia.

To test whether Arabidopsis is locally adapted to its environment, Doug established a reciprocal transplant experiment. In this type of experiment, scientists collect seeds from plants in two different locations and then plant them back into the same location (home) and the other location (away). For example, seeds from population A would be planted back into location A (home), but also planted into location B (away). Seeds from population B would be planted back into location B (home), but also planted at location A (away). If populations A and B are locally adapted, this means that A will survive better than B in location A, and B will survive better than A in location B. Because each population would be adapted to the conditions from their original location, they would outperform the plants from away when they are at home (“home team advantage”). 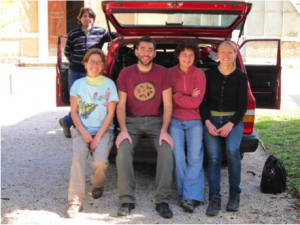 Doug’s team in the Mediterranean prepped and ready to set up the experiment.

Doug originally chose Arabidopsis populations in Scandinavia and the Mediterranean for his research on local adaptation because those two locations have very different climates. The populations may have adapted to have the highest survival and reproduction based on the climate of their home location. To deal with sudden freezes and cold winters in Scandinavia, plants may have adaptations to help them cope. Some plants are able to protect themselves from freezing temperatures by producing chemicals that act like antifreeze. These chemicals accumulate in their tissues to keep the water from turning into ice and forming crystals. Doug thought that the Scandinavian population might have evolved traits that would allow the plants to survive the colder conditions. However, the plants from the Mediterranean aren’t normally exposed to cold temperatures, so they wouldn’t have necessarily evolved freeze tolerance traits.

To see whether freeze tolerance was driving local adaptation, he set up an experiment to identify which plants survived after freezing. Doug again collected seeds from several different populations across Scandinavia and across the Mediterranean. He chose locations that had different latitudes because latitude affects how cold an area gets over the year. High latitudes (closer to the poles) are generally colder and low latitudes (closer to the equator) are generally warmer. Doug grew more seedlings for this experiment, and then, when they were a few days old, he put them in a freezer. Doug counted how many seedlings froze to death, and how many survived, and he used these numbers to calculate the percent survival for each population. To gain confidence in his results, he did this experiment with three replicate genotypes per population.

Doug predicted that if freeze tolerance was a trait driving local adaptation, the seedlings originally from colder latitudes (Scandinavia) would have increased survival after the freeze. Seedlings originally from lower latitudes would have decreased survival after the freeze because the populations would not have evolved tolerance to such cold temperatures.