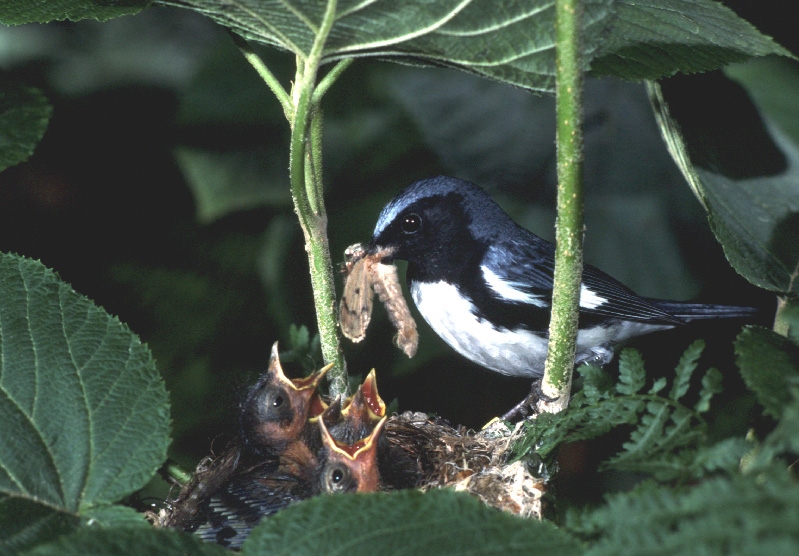 Male Black-throated Blue Warbler feeding nestlings. Nests of this species are built typically less than one meter above ground in a shrub such as hobblebush. Photo by N. Rodenhouse.

The Hubbard Brook Experimental Forest is an area where scientists have collected ecological data for many years. It is located in the White Mountains of New Hampshire, and data collected in this forest helps uncover trends that happen over long periods of time. It is important to collect data on ecosystems over time, because these patterns could be missed with shorter experiments. 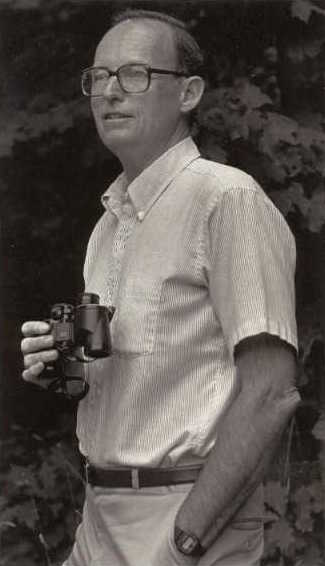 Richard Holmes is an avian ecologist who began this study because he was interested in how bird populations were responding to long-term environmental change.

Each spring, Hubbard Brook comes alive with the arrival of migratory birds. Many migrate from wintering areas in the tropics to take advantage of the abundant insects and the long summer days of northern areas, which are beneficial when raising young. Avian ecologists, scientists who study the ecology of birds, have been keeping records on the birds that live in the experimental forest for over 40 years. These data are important because they represent one of the longest bird studies ever conducted!

Richard is an avian ecologist who began this study. He was interested in how bird populations were responding to long-term environmental changes in Hubbard Brook. Every summer since 1969, Richard takes his team of scientists, students, and technicians into the field to count the number of birds that are in the forest and identify which species are present. Richard’s team monitors populations of over 30 different bird species. They wake up every morning before the sun rises and travel to the far reaches of the forest. They listen for, look for, identify, and count all the birds they find. The scientists record the number of birds observed in four different study areas, each of which are 10 hectare in size – roughly the same size as 19 football fields! Each of the four study areas contain data collection points that are arranged in transects that run east to west along the valley. Transects are parallel lines along which the measurements are taken. Each transect is approximately 500m apart from the next. At each point on each transect, an observer stands for ten minutes recording all birds seen or heard during a ten minute interval, and estimates the distance the bird is from the observer. The team has been trained to be able to identify the birds by sight, but also by their calls. Team members are even able to identify how far away a bird is by hearing its call! The entire valley is covered three times a season. By looking at bird abundance data, Richard can identify trends that reveal how avian populations change over time. 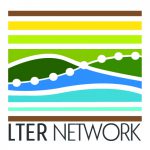 There are two publications related to the data included in this activity: