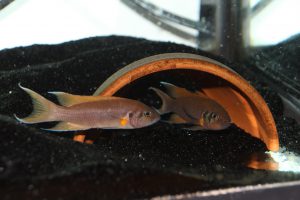 A male and female daffodil cichlid

Have you ever thought about what it would be like to live completely alone, without contact with other people? Nowadays, humans are constantly connected by phones, texting, and social media. Our social interactions affect us in many unexpected ways. Strong social relationships can increase human lifespan, and lower the risk of cancer, cardiovascular disease, and depression. Social relationships are so important that they are actually a stronger predictor of premature death than smoking, obesity, or physical inactivity! Like humans, social interactions are important for other animals as well.

Jennifer is a behavioral ecologist who is interested in daffodil cichlids, a social species of fish from Lake Tanganyika, a Great Lake in Africa. Daffodil cichlids live in social groups of several small fish and one breeding pair. Each group defends its own rock cluster in the lake. The breeding male and female are the largest fist in the group, and the smaller fish help defend territory against predators and help care for newly hatched baby fish. About 200 social groups together make up a colony. 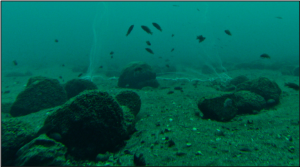 Behavior within a social group may be influenced by the presence of other groups in the colony. For example, neighboring groups can be a threat because they may try to take away territory or resources. After reading about previous research on social interactions in species that live in groups, Jennifer noticed there were very few studies that looked at how neighboring groups affected behavior within the group. Jennifer thought that the presence of neighboring groups may force the breeding pair to be less aggressive towards each other and work together to protect their group’s resources against the outside threat.

To test her idea, Jennifer formed breeding pairs of daffodil cichlids in an aquarium laboratory. She first observed the breeding pairs for any aggressive behaviors when they were isolated and could not see other groups. She observed each group for 30 minutes a day for 10 days. Next, Jennifer set up a clear barrier between the breeding pair and a neighboring group. The fish could see each other but not physically interact. Jennifer again watched the breeding pair and documented any aggressive behaviors to see how the presence of a neighboring group affected conflict within the pair. She again observed each group with neighbors for 30 minutes a day for 10 days.