Why so blue? The determinants of color pattern in killifish, Part II 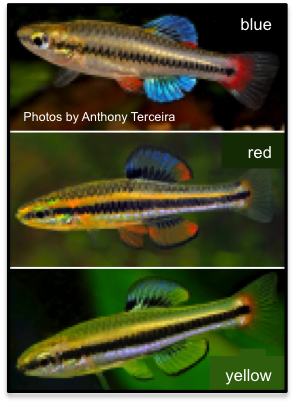 Featured scientist: Becky Fuller from The University of Illinois 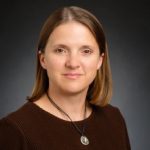 About Becky: I consider myself to be an evolutionary biologist who studies fishes. I grew up in a small town riding horses in 4-H and working in a veterinary clinic. As an undergraduate at the University of Nebraska at Lincoln, I was interested in biology and considering either medical or veterinary school. Two things led to me research in ecology and evolution. In the summer of 1991, I was taking courses at Cedar Point Biological Field Station which was run by the University of Nebraska. I met Dr. Anthony Joern (Tony) who was studying grasshopper community ecology. Tony hired me onto his field crew that summer after the courses were finished. I went on to do an undergraduate thesis under Tony’s mentorship where I studied predation on grasshoppers. I caught the “science bug” and never looked back. Following my undergraduate work, I went to Uppsala University in Sweden on a Fulbright Scholarship. Here, I developed my love for fish and aquatics. I worked with Dr. Anders Berglund on pipefish in a fjord on the west coast of Sweden. Since then, I have had many wonderful advisers, instructors, mentors, and collaborators who have helped me develop skills along the numerous fronts required for a successful career in science. I consider myself very fortunate to have a job where I can do science and teach young, enthusiastic undergraduates.