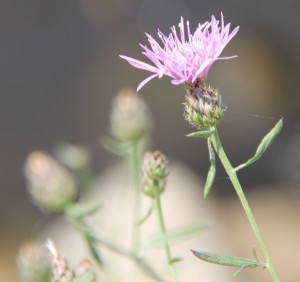 A flower of the invasive plant, Centaurea stoebe (spotted knapweed).

Humans are changing the earth in many ways. First, by burning fossil fuels and adding greenhouse gasses to the atmosphere we are causing climate change, or the warming of the planet. Scientists have documented rising temperatures across the globe and predict an increase of 3° C in Michigan within the next 100 years. Second, we are also changing the earth by movingspecies across the globe, introducing them into new habitats. Some of these introduced species spread quickly and become invasive. Invasive species harm native species and cost us money. There is also potential that these two changes could affect one another; warmer temperatures from climate change may make invasions by plants and animals even worse.

All living organisms have a range of temperatures they are able to survive in, and temperatures where they perform their best. For example, arctic penguins do best in the cold, while tropical parrots prefer warmer temperatures. The same is true for plants. Depending on the temperature preferences of a plant species, warming temperatures may either help or harm that species. 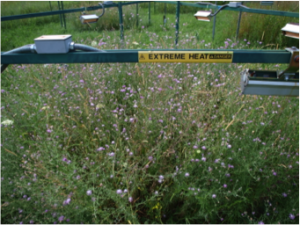 A view of the plants growing in a heated ring.
Notice the purple flowers of Centaurea stoebe.