Is chocolate for the birds? 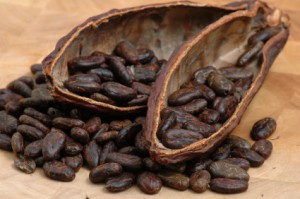 About 9,000 years ago humans invented agriculture as a way to grow enough food for people to eat. Today, agriculture happens all over the globe and takes up 40% of Earth’s land surface. To make space for our food, humans must clear large areas of land, which creates a drastic change, or disturbance, to the habitat. This land-clearing disturbance removes the native plants already there including trees, small flowering plants, and grasses. Many types of animals including mammals, birds, and insects depend on these native plants for food or shelter. Large scale disturbances can make it difficult to live in the area. For example, a woodpecker bird cannot live somewhere that has no trees because they live and find their food in the trees.

However, some agriculture might help some animals because they can use the crops being grown for the food and shelter they need to survive. One example is the cacao tree, which grows in the rainforests of South America. Humans use the seeds of this plant to make chocolate, so it is a very important crop! Cacao trees need very little light. They grow best in a unique habitat called the forest understory, which is composed of the shorter trees and bushes under the large trees found in rainforests. To get a lot of cacao seeds for chocolate, farmers need to have large rainforest trees above their cacao trees for shade. In many ways, cacao farms resemble a native rainforest. Many native plant species grow there and there are still taller tree species. However, these farms are different in important ways from a native rainforest. For example, there are many more short understory trees in the farm than there are in native rainforests. Also, there are fewer small flowering plants on the ground because humans that work on cacao farms trample them as they walk around the farm. 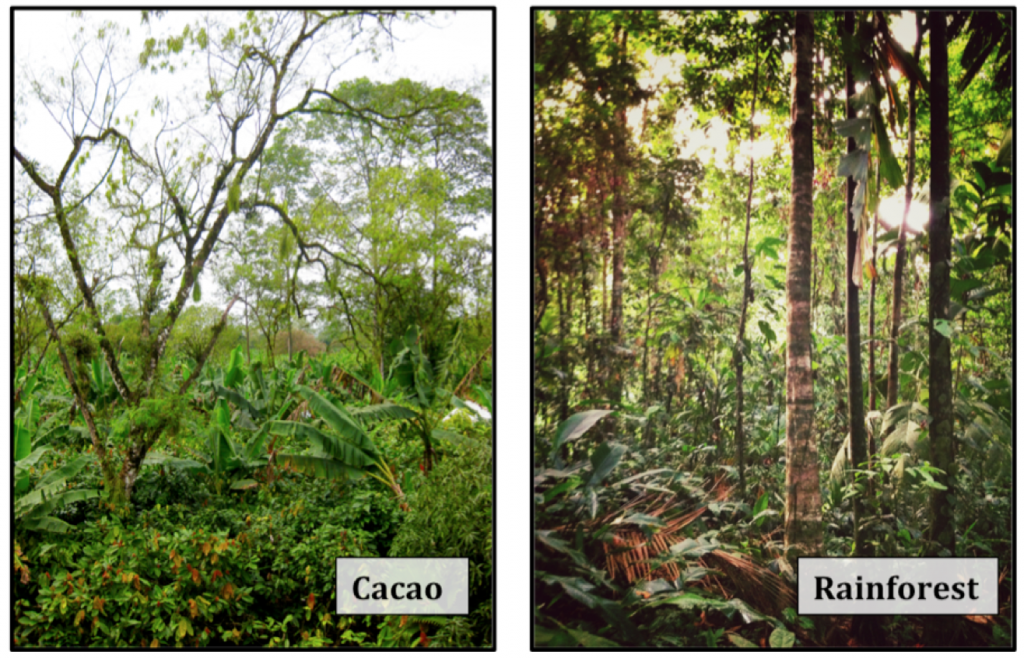 Part I: Skye is a biologist who wanted to know whether rainforest birds use the forest when they are disturbed by adding cacao farms. Skye predicted she would see many fewer birds in the cacao farms, compared to the rainforest. To measure bird abundance, she simply counted birds in each habitat. To do this she chose one rainforest and one cacao farm and set up two transects in each. Transects are parallel lines along which the measurements are taken. She spent four days counting birds along each transect, for a total of eight days in each habitat. She had to get up really early and count birds between 6:00 and 9:00 in the morning because that’s when they are most active.

Skye broke her abundance data down to look more closely at four types of birds: 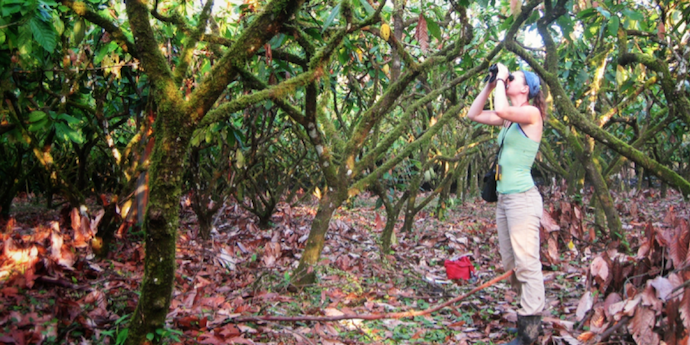 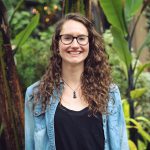 About Skye: As a child Skye was always asking why; questioning the behavior, characteristics, and interactions of plants and animals around her.  She spent her childhood reconstructing deer skeletons to understand how bones and joints functioned and creating endless mini-ecosystems in plastic bottles to watch how they changed over time.  This love of discovery, observation, questioning, and experimentation led her to many technician jobs, independent research projects, and graduate research study at Purdue University.  At Purdue she studies the factors influencing oak regeneration after ecologically based timber harvest and prescribed fire.  While Skye’s primary focus is ecological research, she loves getting to leave the lab and bring science into classrooms to inspire the next generation of young scientists and encourage all students to be always asking why!