This post is by MSU postdocs Melissa Kjelvik and Liz Schultheis, and BEACON education director Louise Mead. See the original article on the BEACON website (reproduced below): 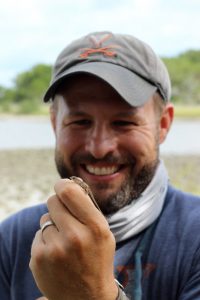 The National Association of Biology Teachers (NABT) annual Professional Development Conference provides biology educators from across the nation the opportunity to join other leaders in biology and life science education for four days of renowned speakers, hands-on workshops, informative sessions, and special events. In November 2017 the BEACON Center partnered with the American Society of Naturalists to sponsor a special symposium highlighting cutting edge evolutionary research and introducing attendees to a new study system, research questions, and related resources they could incorporate into their classrooms.

This year’s Evolution Symposium: Emerging Research in Evolutionary Biology at NABT featured a research talk by Dr. Robert Cox (Bob) on selection and fitness in anole lizards, followed by a Data Nugget activity highlighting data from his research. Bob, an evolutionary biologist from the University of Virginia, studies these charismatic lizards, native to Cuba and the Bahamas. He describes anoles as “ecological popcorn” because they are so abundant and are eaten by many organisms. In Florida, where the anoles are invasive, you can shake a bush and 10 will fall out! Bob shared an amazing talk describing his lab’s research on brown anoles and the challenges and opportunities of studying natural selection in the wild. Bob uses real-time studies of wild animal populations to understand the ecological basis of natural selection as it happens. He chose to work with anoles because they are ideal organisms for studies of natural selection; they are abundant, easy to catch, and have short lifespans.

When Charles Darwin talked about the “struggle for existence” he was making the observation that many individuals in the wild don’t survive long enough to reach adulthood. Many die before they have the chance to reproduce and pass on their genes to the next generation. Darwin also noted that in every species there is variation in physical traits such as size, color, and shape. Is it simply that those who survive to reproduce are lucky, or do these traits affect which individuals have a greater or lesser chance of surviving? While evolutionary biology is often viewed as a historical science, exploring processes that have played out over millions of years, Bob stressed that natural selection, the primary force of adaptive evolution, is happening all the time and can be measured in natural populations! Along with field studies, Bob and his lab use genetic methods to help them track the reproductive success of thousands of individuals across multiple generations. Experimental manipulations of predators and competitors also help in understanding the ecological basis of natural selection. 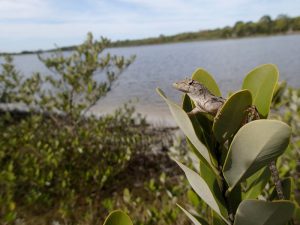 The talk was followed by a hands-on workshop, led by Aaron Reedy, Elizabeth Schultheis, and Melissa Kjelvik, where participants worked together as students on two Data Nugget activities. This open time gives teachers the opportunity to have discussions about connections to educational standards or pedagogical strategies that are helpful for them to translate the research and associated data back to their classroom settings. Data Nuggets (http://datanuggets.org) are free classroom activities, designed to improve the scientific and quantitative abilities of K-16 students by providing them with authentic data collected by practicing scientists. The research in Data Nuggets on the anole lizards focused on two traits – their size, and their dewlaps. The Data Nuggets take students through the process of exploring two different hypotheses.  In Part I students calculate and graph %survival of lizards according to their size at the beginning of the season, to explore the hypothesis that size influences survival and overall fitness.  In Part II, students graph % survival as a function of dewlap size. The dewlap is an extendable red and yellow flap of skin on their throat. To communicate with other brown anoles, they extend their dewlap and move their head and body. Males have particularly large dewlaps, which they often display in territorial defense against other males and during courtship with females. Females have much smaller dewlaps and use them less often. This trait comes with a trade off – while it attracts the desired attention of females, it also attracts predators. There could be sexual selection favoring this trait, while natural selection works against it.

In these and other Data Nugget activities, students read background information on a study system and scientist, graph and interpret authentic data from their research, and use their graphs to construct explanations based on sound reasoning and evidence. By relying on authentic research and data, Data Nuggets’ innovative approach reveals to students how the process of science really works, while building their quantitative abilities and interest in science. One teacher from the workshop shared that, “the beauty of the activity is in the simplicity,” which is a great testament to Bob and Aaron’s ability to take complex evolution research and distill it down to a core message. The Data Nuggets include the story behind Aaron and Bob’s research to further engage students in the journey taken by the scientist as they formulated their research questions and ideas.