Lobsters out of water: Scientists at film camp in Maine

This post is by MSU graduate student Carina Baskett. See the original article on the BEACON webpage (reproduced below): 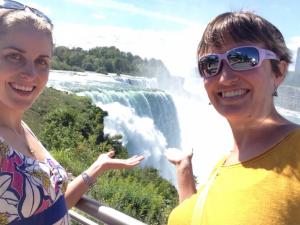 Carina and her fellow science communicator Klara Scharnagl making a stop at Niagara Falls on the way back from a film workshop in Maine.

Klara and I were at a weeklong film workshop in Maine the first week of September to improve our filmmaking skills. We are working on a BEACON-funded project with Melissa Kjelvik, Liz Schultheis, Travis Hagey, and Anna Groves to make videos for classrooms about scientists. The videos will accompany Data Nuggets (DNs), which are exercises for K-12 and undergraduate students to practice working with data from real, current research. DNs were co-developed by MSU graduate students and K-12 teachers.

The goals of the videos are two-fold. First, we aim to redefine how students see science and scientists by featuring researchers from diverse backgrounds, giving students more face time with the scientists than they can get from a photo in a DN. Second, we aim to enhance evolution education by showing how data is collected and presenting information in an alternative media to the standard written descriptions. 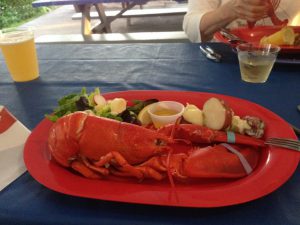 A Maine lobster dinner was the cherry on top of the film workshop sundae!

On top of those goals, there is the overriding need for the videos to be engaging, and the first, somewhat invisible step toward that goal is to be technically proficient. Klara and I each have experience with science outreach and a smattering of the requisite technical skills for filmmaking, but we needed more training and experience with videos. So we found a workshop, “Documentary Camera” at a school called Maine Media.

To practice the techniques that we would be using for the DN videos, Klara and I made a “pilot.” We decided that it had to be about plants or lichens (the organisms that we study), not humans or animals, because a major challenge of the DN videos will be to tell engaging stories about organisms and questions that aren’t inherently exciting to most of the population. Personally, I find plants and lichens to be a lot more exciting than, say, sports, but I realize I’m in the minority with that view.

The closest we could come to interviewing a plant expert was to go to an “herbal apothecary,” a pharmacy where all the medicines and remedies come from plants. The message of the video was to get viewers excited about the chemicals that plants make, by pointing out that traditional and many modern medicines come from plants, and then slip in some biology by asking why plants make these chemicals (generally to defend themselves from pests and disease).

We visited the apothecary on short notice, and were able to snag a quick interview with a gardener. When asked, “Plants don’t make these chemicals for human use. Why do they?” she said, “How do we know they don’t make them for humans? Hmm, I’ll have to think about that.” This was an informative moment for us in a couple ways.

First, it was a good reminder that a lot of the scientific knowledge we take for granted, and even the questions that scientists think to ask, are not common sense. Even someone whose job it is to work with plants and the chemicals they manufacture was not considering the evolutionary explanation for why plants have these adaptations that we are co-opting. Yet it would be helpful for someone working with plant medicine to have an understanding that related plants might manufacture similar compounds and that the environmental context (such as an outbreak of caterpillars on a plant) might affect the drugs that they are harvesting. That’s why evolution education and outreach are so important!

Second, the interview was good practice for the DN videos because we aren’t always going to get a nice, video-ready sound bite from everyone we talk to. Some of the scientists we interview might use too much jargon and be unable to make their research approachable. But that’s why we will include narration and drawings to guide the narrative. We ended up using the gardener’s quote about why she thinks plants are amazing and exciting, and we provided the explanation of why plants make chemicals that we use for medicine.

So was our science communication effective? On the last day of the workshop, participants from several classes ate an amazing dinner of Maine lobster, and then watched each other’s projects. It was funny to see our educational video mixed in with a beautifully shot piece showing a nearby harbor as the catch was being brought in; with a portrait of a pair of local artists whose house is covered in drawings; and with some dramatic fictional pieces from another class. When I asked everyone afterward, “So why do plants make chemicals that we use for medicine?” almost all of them answered correctly. If we can reach a group of filmmakers who didn’t even know there would be a quiz, hopefully we can have an impact on students, by helping to make Data Nuggets just a little more delicious.

You can watch our 5-minute video below! And if you have an extra few minutes and wouldn’t mind giving us some feedback, please click here.