Invasive reeds in the salt marsh 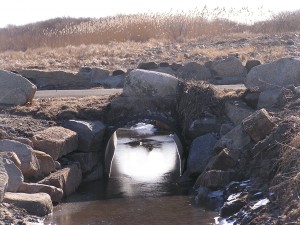 Culverts run under roads and allow water from the ocean to enter a marsh. Phragmites can be seen growing in the background.

Phragmites australis is an invasive reed, a type of grass that grows in water. Phragmites is taking over saltwater marshes in New England, or wetland habitats near the Atlantic Ocean coast. Phragmites does so well it crowds out native plants that once served as food and homes for marsh animals. Once Phragmites has invaded, it is sometimes the only plant species left! Phragmites does best where humans have disturbed a marsh, and scientists were curious why that might be. They thought that perhaps when a marsh is disturbed, the salinity, or amount of salt in the water, changes. Phragmites might be able to survive after disturbances that cause the amount of salt in the water to drop, but becomes stressed when salinity is high. 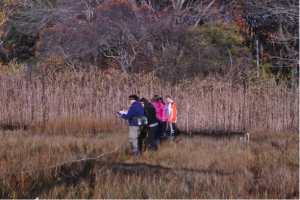 Students collecting data on the plant species present in the marsh using transects. Every 1m along the tape, students observe which plants are present. Phragmites is the tall grass that can be seen growing behind the students.

Fresh water in a marsh flows from the upstream source to downstream. Saltwater marshes end at the ocean, where freshwater mixes with salty ocean water. One type of disturbance is when a road is cut through a marsh. Upstream of the road, the marsh is cut off from the salt waters from the ocean, so only fresh water will enter and salinity will drop. Downstream of the road, the marsh is still connected to the ocean and salinity should be unaffected by the disturbance. Often, a culvert (a pipe that runs under the road) is placed to allow salt water to pass from the ocean into the marsh. The amount of ocean water flowing into the marsh is dependent on the diameter of the culvert.

Students at Ipswich High School worked with scientists from the Mass Audubon, a conservation organization, to look at the Phragmites in the marsh. They looked at an area where the salinity in the marsh changed after a road was built. They wanted to know if this change would affect the amount of Phragmites in that marsh. In 1996, permanent posts were placed 25 meters apart in the marsh. That way, scientists could collect data from the same points each year. At these posts, students used transects, a straight line measured from a point to mark where data is collected. Then they collected data on all the plants that were found every meter along the transects. Data has been collected at these same points since 1996. In 2005, an old 30cm diameter culvert was replaced with two 122cm culverts. These wider culverts allow much more salty ocean water to flow under the road and into the marsh. Students predicted that after the culverts were widened, more ocean water would enter the marsh. This would make salinity go up, making it harder for Phragmites to grow, and it would decline in numbers. Students continued to survey the plants found along transects at each permanent post and documented their findings.

Featured scientists: Lori LaFrance from Ipswich High School, Massachusetts and Liz Duff from Mass Audubon. This study was part of the PIE-LTER funded by the NSF. 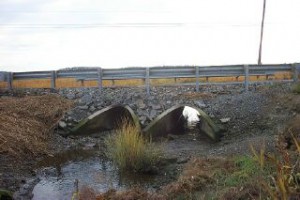 View of the two new culverts. 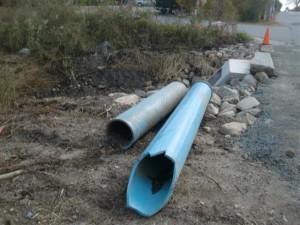 The old pipe that was removed, and the new culvert. 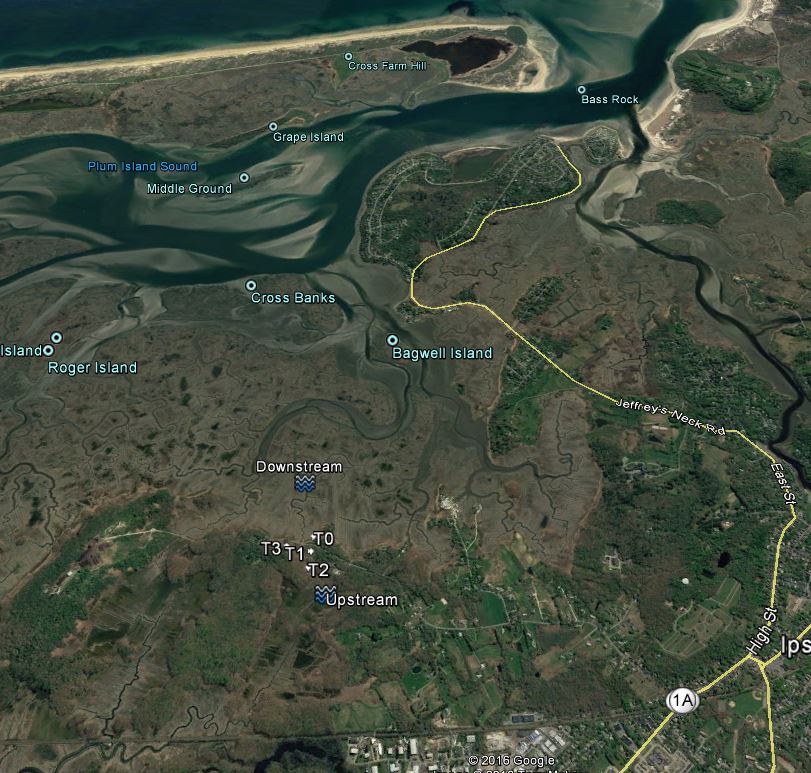 Arial view of the upstream and downstream research sites.